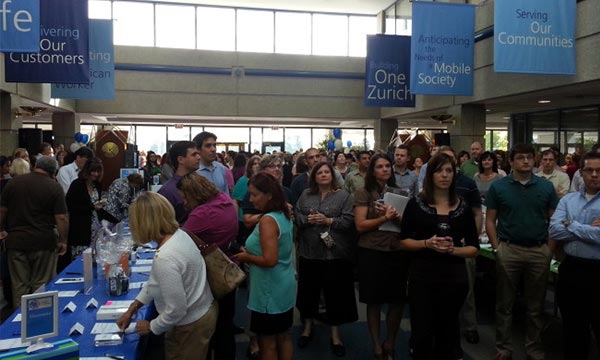 Charity Fundraisers: Zurich recently held its 2nd annual “Kidz Changing Lives” at the Zurich Building in Schaumburg, Illinois.
The best part of our job is doing wonderful charity fundraisers like this. This charity fundraiser was started by two children of Zurich employees who wished to help people less fortunate than themselves. They began their charitable efforts by emptying their piggy banks to start the fund, and urged other children to do the same. This year, the children alone raised $1,500. It is not very common to see kids successfully putting on charity fundraisers like the Zurich’s annual “Kidz Changing Lives”.

The event hosted a variety of items from local restaurants and artists, as well as ten large ticket items in the live auction, including a Chicago Blackhawks sky box and shopping and lunch with Zurich CFO Dalynn Hoch.

The live auction, conducted by Sayre & Jones Auctioneers, as well as the silent auction and a Fund-a-Need, helped to raise funds for the following charities: United Way, American Cancer Society, Habitat for Humanity, St. Jude Children’s Hospital, the Make-A-Wish Foundation and the American Red Cross.