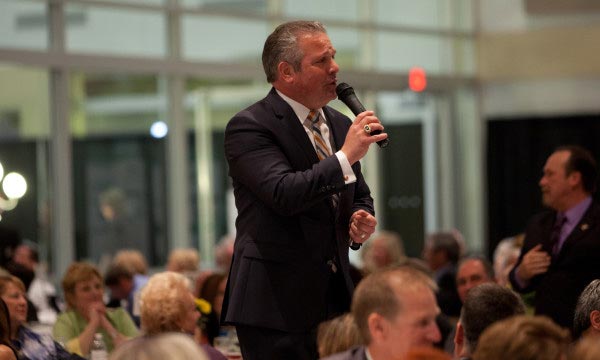 (Naperville, IL – February 27, 2013)  Naperville CARES invites the community to a fundraising event featuring over 25 of the best Naperville restaurants. The 10th Annual Cuisine for a Cause, A benefit for Naperville CARES, will be held on Saturday, April 27, 2013 at Tellabs Global Headquarters in Naperville. The event is made possible by a partnership with My Chef Catering and is presented by Invesco and Coldwell Banker Residential Brokerage Charitable Foundation.
“We are very excited to be hosting the 10th Annual Cuisine for a Cause which is Naperville CARES’ biggest fundraiser of the year,” said Janet Derrick, Naperville CARES executive director, “Thanks to our generous sponsors, participating restaurants, wine and beer merchants, auction donors and guests, our first nine events have raised $860,000 to benefit the programs of Naperville CARES.  Our goal is to reach $1 million in total funds raised at our yearly Cuisine event which has become known as the largest cocktail party in Naperville.”
Cuisine for a Cause will feature samples of signature dishes from over 25 prominent Naperville restaurants, live entertainment, open bar, wine and beer tasting and auctions. New to the event this year is Art Beat Live! While using both hands and multiple brushes, painter Elliott From throws paint, choreographed to music, creating 4 foot by 5 foot canvas paintings of famous rock icons, public figures and celebrities. Also new to the event is auctioneer Keith Jones of Sayre & Jones Auctioneers, seen in BMO Harris Bank commercials, who promises to bring his unique style to the event.
“Cuisine for a Cause is the perfect Naperville event,” said event chairman and My Chef owner Karen Garlough, “With over 500 in attendance, Cuisine for a Cause is a fun and lively evening with guest ticket proceeds supporting Naperville CARES.”
Sponsorship opportunities are still available at multiple levels ranging from Platinum at $5,000 to Friend of CARES Sponsorships at $300.  Anyone interested in participating in Cuisine for a Cause as a sponsor please contact Janet Derrick at 630-369-0200. Those interested in donating auction items may call Sandy Freeburg at 630-391-1540.
Tickets for the event are $90 per person before March 31st or $100 per person after March 31st.  The ticket price includes food, drink and entertainment and can be purchased online at www.napervillecares.org or by calling the CARES office at (630) 369-0200.
Headquartered in Naperville, IL, since 1999 Naperville CARES has distributed over $2.1 million in financial assistance to aid local families by providing $1.3 million in CARES funds and collaborating with area congregations, government and social services agencies to provide an additional $844,000 to meet the basic needs of local families in crisis. In addition, through their Car Donation Program, CARES has supplied over 500 donated vehicles to eligible households. Naperville CARES welcomes your support of Toasting for a Cause, Cuisine for a Cause, CARESGiver, CARES Car Donation program and other events. For more information visit www.napervillecares.org.