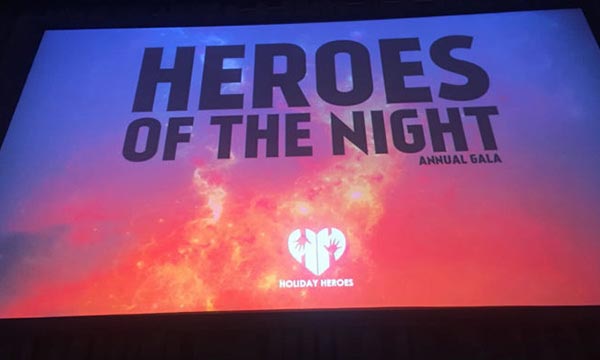 Holiday Heroes Foundation creates and hosts hospital parties for ill children. They help them forget, at least for a little while, the struggles they are going through. Batman, Wonder Woman, Captain America, Cinderella and more and the real super heroes of the night…..the children, along with 800 guests attended the annual Holiday Heroes Fundraiser at The Museum of Broadcast Communications, Chicago. The event was held to help raise dollars to bring pizza, burgers, chips desserts, gift cards and presents to the children battling life threatening diseases.

Several spectacular restaurants and purveyors of wine & spirits from around Chicago participated in the food stations situated around the room. The event also included a VIP balcony reception, all for the benefit of these children.

Fundraising specialists, Sayre & Jones Auctioneers, Ltd. helped facilitate the evenings events. Auctioneer Keith Jones, along with Tim Jabaay and Ron Rhodes, captivated the audience with energy and excitement during the live auction resulting in a record number of dollars raised. It was exceeded by the very moving, touching and heroic speech given by “Iron Nick”, now 16 years old, who is a survivor. His parents stated how much joy and happiness Holiday Heroes brought to Nick and how they lifted his spirits during the years he spent in the hospital.

After Nick’s speech, auctioneer Keith Jones conducted the very successful Fund a Need portion of the evening. Keith stated “It felt like all 800 people that were in attendance participated in giving dollars to Holiday Heroes”!

Sayre & Jones Auctioneers were honored to be chosen as Holiday Heroes’ fundraising auction company. This was our first year with Holiday Heroes Foundation and we are looking forward to a long-lasting relationship!