Sheridan Road Charitable Foundation – Songwriters in the Round!!! 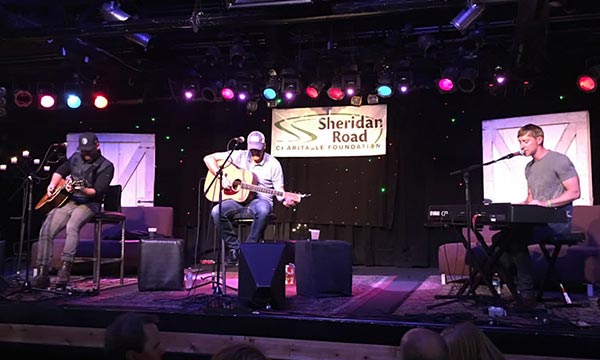 Sheridan Road Foundation held another fantastic fundraising event featuring Grammy award-winning country music songwriters Kelly Lovelace, Chris De Stefano, and Ashley Gorley. Between them, they have over 100 number one Billboard hits! The event was held at Joe’s on Weed Street, Chicago. The songwriters performed some of their greatest songs made famous by the likes of Carrie Underwood and Brad Paisley while telling stories about how the songs were written and the stars that sang them. The crowd of over 250 people rocked and sang along!

In between sets, new this year, was a live auction featuring signed guitars, travel packages, chef dinners and more. Keith Jones of Sayre & Jones Auctioneers kept the evening lively and the room motivated. The generosity of the guests was fast and furious before settling down to hear about this year’s recipients.

The Hand Club is a Chicago based after school program that emphasizes academic excellence while nurturing the whole child, mind, body and soul. They help children in high risk inner-city neighborhoods see a doctor for the first time or have warm, nutritious meals; things many of us take for granted but they otherwise, would not have.

The second benefactor this year was Bernie’s Book Bank which is quality books for at risk kids. Books for a better life. Two out of three low income children have no books of their own. Bernie’s Book Bank, Chicago’s largest provider of quality children’s books, is changing that with twelve books per year for twelve years.

After the speakers were finished, Keith conducted the fund-a-need. When all was finished, the auction and fund-a-need set a new record.

The Sheridan Road Charitable Foundation mission is to provide philanthropic and financial support to a number of established social services and research organizations that focus on improving our educations system, empowering underprivileged communities and assisting leading edge cancer research institutions.